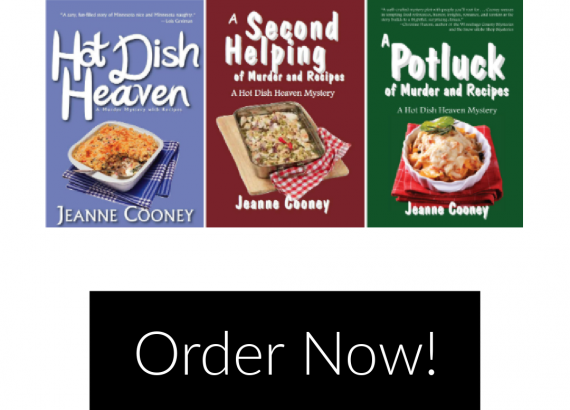 Home / Books / A Potluck of Murder and Recipes

A Potluck of Murder and Recipes, the third book in the popular Hot Dish Heaven Mystery Series by Minnesota author Jeanne Cooney, will be released nationally on June 6, 2016.

However, those who attend the book launch at the city hall in Hallock, Minnesota, on Sunday, May 22, from 4:00 to 6:00 p.m., will be able to purchase advance copies, signed by the author.
Cooney, who has become a regular speaker at conferences and events, will kick off the book launch with a humorous account of “life as a burgeoning, middle-aged, writer in rural Minnesota.” She and her books have been featured on Twin Cities’ television shows Fox 9 Mornings and KARE 11 at the State Fair as well as in the Minneapolis StarTribune and the Fargo Forum. Minnesota Public Radio also recently named her one of a handful of authors to read if interested in Minnesota-based mysteries. And Mpls-St. Paul Magazine has said of her work, “What makes her books so fun is Cooney’s ability to spit out phrases such as ‘uff-da’ and dish out recipes such as Jell-O Salad and Tater-Tot Hot Dish faster than you can say, ‘Yah, you betcha.’”

Folks attending the book launch are invited to bring a dish made from any of the recipes in the first two Hot Dish Heaven books. Then, for a donation of $5 per person, attendees will sample all the offerings and vote for their favorites. The winners will receive free copies of A Potluck of Murder and Recipes, while the public library in Hallock will receive the monetary donations. For their part, Cooney and her publisher, North Star Press, will donate twenty percent of book sales from the event to the Kennedy Community Center’s “Little Free Library.”

While written as a series, the Hot Dish Heaven books, which also include Hot Dish Heaven: A Murder Mystery with Recipes and A Second Helping of Murder and Recipes, can be read independently. Although the stories are fictitious, they are set in the actual town of Kennedy, a Scandinavian, Lutheran, farming community in northwest Minnesota. Each book features a tongue-in-cheek “who done it” as well as Ole and Lena jokes and old-time hot dish, Jell-O, and bar recipes.

At just $14.95 a piece, plus tax, the books make great gifts for mystery buffs, humorists, and cooks, particularly if they grew up in the Midwest. In fact, the first two books in the series have hit No. 1 in national Amazon sales in the “rural humor” category.

Asked about this latest book, Cooney would only say that the murder victim is discovered in Lake Bronson State Park, just east of Kennedy, and that many of the characters from the previous books return to solve the crime before it interferes with a much-anticipated wedding.

While the new book will be available at gift shops, libraries, bookstores, or on Amazon after June 6, some Red River Valley retailers will begin selling advance copies on May 24. They include Anderson’s Pharmacy in Hallock.